Tear down this wall

Halifax gets a rare chance to correct an urban-planning disaster, and reunite a city.
Lou Collins was one of “those” teachers; the kind that people bring up when they need an example of educators who changed their lives. His history lectures at Westmount School about the early days of Halifax were among the most riveting moments of my school years. The stories he spun cemented my love of history and changed the way I thought about my hometown. It’s fair to say the late Mr. Collins changed the way a lot of people thought about Halifax. In 1970, Collins and his small band of urban warrior colleagues, including architect Allan Duffus, Heritage Trust of Nova Scotia past presidents Gil Hutton and Joyce McCulloch and Halifax mayor Allan O’Brien, won their battle to save a collection of moldering waterfront warehouses from the wrecking ball, creating a downtown attraction called Historic Properties in the process.

They were nearly too late. The 1960s philosophy of urban renewal tore through downtown Halifax like a buzz saw. In 1956, the city commissioned University of Toronto professor Gordon Stephenson to conduct an urban renewal study of downtown Halifax. Stephenson’s vision was one of concrete high rises, superhighways and slum removal—a plan he laid out in his detailed final report.
City planners followed it like gospel. By 1968, whole neighbourhoods they had levelled; more than a dozen downtown city blocks disappearing in the name of progress, all on the promise of vague plans to replace them with something more modern. Scotia Square was the first installment of that new modern vision; the second was to be a monstrous piece of infrastructure with the working name of Harbourside Drive. The six-lane highway would skirt the city’s waterfront, obliterating Water Street and allowing thousands of cars every hour to feed into secondary streets along the downtown core, much like the Gardiner Expressway did in Toronto. It would be an efficient esthetic nightmare.
Thanks to the work of Collins and his colleagues, Harbourside Drive died on the drafting table. Now, the Cogswell Interchange is the only evidence of the plan, an anomalous pretzel of highway infrastructure wedged up against Historic Properties. An overpass to nowhere. An aerial shot of downtown Halifax shows instantly the chunk of land the interchange takes up—a huge gap in the downtown buildings filled with ribbons of overbuilt roads. Last year, the city sunk $1 million into the aging structure just to maintain it. Four decades later, city planners are finally giving serious thought to replacing it with a more standard grid of streets and traffic lights to control the flow of 22,000 cars and trucks that travel the Barrington corridor daily.
Urban renewal was the great municipal planning mistake of the 1960s, according to urban planner and HRM Waterfront Development’s vice-president of planning and development Andy Fillmore. It’s a mistake that many major North American cities are still struggling to correct. Boston’s Big Dig, San Francisco’s Embarcadero project and Toronto’s recent waterfront development are all efforts to atone for past urban renewal sins. The Cogswell Interchange removal project will soon join that list, Fillmore predicts. “It’s pretty much a foregone conclusion that the city is going to get rid of it,” he says. “The only variable is when.”

Already, public meetings are taking place to answer the larger question of what to do with the 15-acre parcel of prime downtown real estate once the interchange is gone. With no Citadel view planes restrictions in that area to contend with, developers only have to worry about the Citadel Ramparts Bylaw that forbids buildings tall enough to be seen poking over the walls of the Citadel—a caveat that will allow buildings up to 30 storeys tall.
There have been some predictably offbeat ideas thrown out, including suggestions that the concrete overpass could serve as the starting point for an out-of-the-box urban renewal project like the High Line project in New York City that turned an obsolete elevated rail line into a 1.6-kilometer-long linear park. Could the Cogswell Interchange itself become an innovative multi-level urban park, or even a retro concrete bandstand? Probably not, says Fillmore. The only way to develop it properly will be to remove all traces of the roadway.
But there’s another opportunity for innovation here—one that could make downtown Halifax a model for efficient communities around the world through a concept called district heating. The sewage the flows through the Harbour Solutions treatment plant a couple of blocks from the interchange has a mean temperature of 15.8 C. If just five degrees of the heat is mined, says Fillmore, it has the potential to heat 4,250 typical homes. Combine that with summer cooling water drawn from Halifax Harbour and the potential for a self-sufficient international demonstration project is huge. Add an intermodel transit terminal already on the drawing board with buses, ferries, taxi stands and bike lockers, and a vision quickly emerges of a community that’s the polar opposite of the one Gordon Stephenson saw. “We don’t necessarily need to be thinking of tall buildings here,” says Fillmore, “but we do need to have density for this land to really be used properly.”
Despite the cost of removing the interchange, the project should turn a tidy profit for the city, says Fillmore. The parcel of land will be extremely valuable once it’s freed up for development, both as a commodity for sale by the city and as a generator of new municipal taxes. He points to the current Mary Ann project near Spring Garden Road as a template for how it can be done properly. The Mary Ann land languished as a municipal-owned parking lot for half a century until the city decided to market it and sell it as a downtown development. The combination retail and residential project now under construction by WM Fares Group will be a major tax generator and a downtown centrepiece; the money that the city has already made from it has paid for landscaping and other infrastructure at the new public library building nearby.
There were a few positives that came out of the Cogswell Interchange project, if you look hard enough. Most of them were unintentional. The Granville Street Mall, arguably one of the most pleasant pedestrian streetscapes in the city, was created when the interchange turned that part of Granville into a dead-end street; and the enclosed pedestrian overpass network that connects many of the downtown core’s buildings and provides a respite from winter winds came about because of the need for pedestrians to be able to cross the interchange safely.
But most of the interchange’s effects were negative. The construction acted as a mini Berlin Wall for Halifax, cutting off the once vibrant community around Gottingen Street from the rest of downtown. With the disconnection, the restaurants, shops an nightlife of Gottingen withered and died. “It wasn’t just a physical disconnect,” says Fillmore. “It was emotional as well.” Removing the interchange could mean a renaissance for downtown Halifax’s North End, making land in the area more valuable in the process. In fact, it will probably have a dramatic effect on the entire city. “It’s not just an opportunity to connect north and south,” says Fillmore. “It’s also an opportunity to connect the waterfront back to the Common and Citadel Hill.”
But even when the interchange is finally demolished and the rubble cleared away, the developers will have to wait a little longer. Archeologists will be the first people on the scene. Bruce Stewart is one of them, a globe-trotting urban archeologist who has already excavated the rude homes of canal-building navvies in Shubie Park and a downtown neighbourhood known as Cornwallis Lane that now lies under a sewage treatment plant. He’s been dreaming about the chance to see what’s under the Cogswell Interchange for a long time. If the heavy equipment didn’t dig too deeply and destroy the foundations and traces underneath, there’s a chance that the area could be rich with the vital secrets of the domestic, military and commercial life of early Halifax. 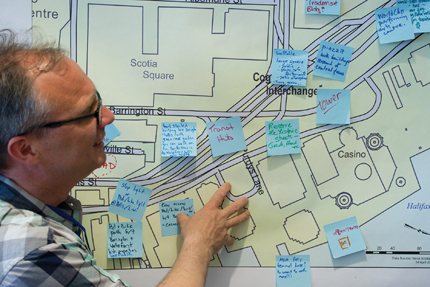 Ideas for the Cogswell Interchange are added to a map during the Cogswell Shake-up event. Photo: T.J. Maguire

“The interchange occupies an interesting area of ‘old’ Halifax,” says Stewart. “It overlies the northern boundaries of the old town, and as such it covers portions of the town site, the surrounding palisade and the northern extension of the town leading toward the Naval Yard.”
Regardless of what ultimately happens to Halifax’s urban white elephant, it’s worth spending plenty of time on planning, discussion and debate, says Fillmore. The interchange project is a rare chance for the city to correct a past mistake, and we must get it right this time. “Cities don’t get these kinds of opportunities very often,” he says. “The bottom line is that if we can bring back the vibrant communities that once existed downtown, we’ll have done a great job.”

Plus: Straight from the source — a different kind of grocery shop Six days after the remnants of hurricane Fiona h [...]

Plus: Halifax's first marine disaster, and the plucky boy who came to the rescue — recalling the sinking of HMS Tribu [...]

Plus: One year of Unravel Halifax — an evolving magazine for a changing city Questions are mounting about the reli [...]

Plus: An Egyptian family came to Halifax for a better life, but found a housing crisis and inaccessible health care [...]

Plus: Eating well during a blackout — tips and recipes It's raining in much of the province and winds will intensi [...]